We will be updating this article as new information comes in.

The legal community has been rallying to support employees, colleagues and friends who need help in Ukraine, following the invasion by Russia on 24 February. Here are the companies and individuals speaking out, including the heartbreaking story of DLA Piper technology architect Tymofii Dmytrenko, who was visiting family and friends in Ukraine before the Russian invasion, and has since been called up to serve in the territorial defence forces. Baker McKenzie, CMS and Dentons have closed their offices in the region, see more on that below. And business leaders are being urged to speak up and out in support of Ukraine, with many senior partners criticising Norton Rose Fulbright, who was reported by The Lawyer and the Law Society Gazette to have banned lawyers from providing external commentary on Russian sanctions, albeit the firm says it supports its attorneys passing comment on other aspects of the Ukraine crisis.

UK-based DLA Piper technology architect Tymofii Dmytrenko, who works in the international law firm’s Leeds office, was visiting family and friends in Kyiv on 18 February. In a heartbreaking post on LinkedIn on 28 February, he said: “Originally we planned to come back on 28 February, but quickly realised that it will be too risky for us to return to Kyiv from skiing resort (Western Ukraine).”

While DLA has managed to bring his family back to the UK, Dmytrenko concludes: “Today I was called to serve in territorial defense forces.” 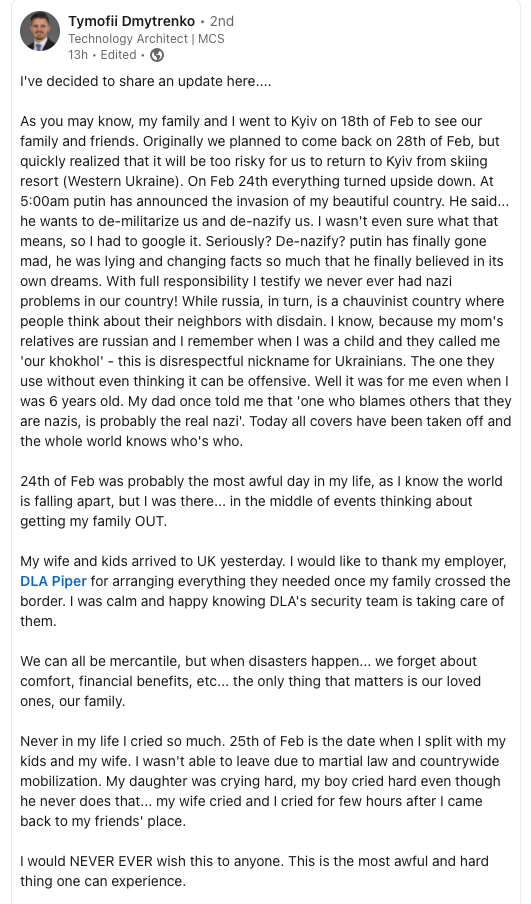 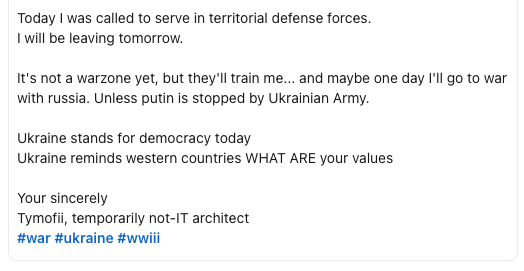 Intapp has an office in Kyiv and on LinkedIn has 54 people listed in the region. Speaking out on LinkedIn on 28 February, Intapp’s chief strategy officer Mark Holman said: “It’s hard to express the sorrow, anger and frustration for all we are seeing this week. We have Intapp‘ers that are now in harm’s way and faced with defending their country. I can’t begin to imagine how they and their families must feel right now. I want to express my support for them, all of the Ukrainian people and the admiration I have for their courage and the courage of their people and leaders. I can only hope there is a path ahead to resolve this.” #Ukraine #Intapp #standwithukraine 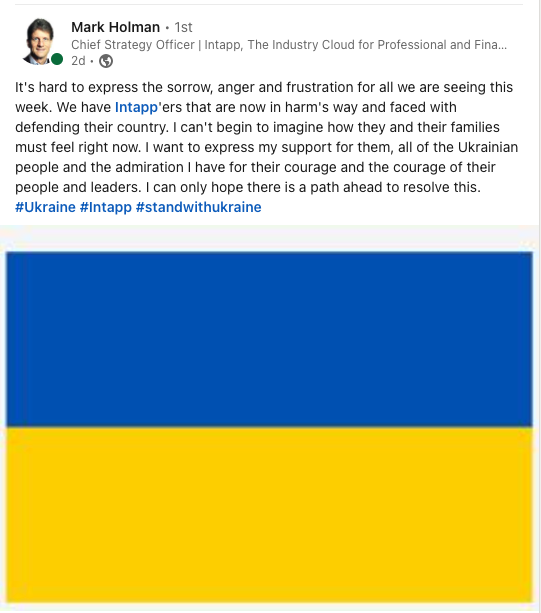 Litera also has an office in Kyiv, and according to CEO Avaneesh Marwaha, has around 75 people working in the region. Marwaha has said in a post on 28 February on LinkedIn that the global Litera family stands up for Ukraine, as business leaders are urged to speak out in support of the besieged nation.

Marwaha said: “If you know Litera, you know we have an amazing team in Ukraine. With nearly 75 strong, I stand behind them as they protect their families, friends and land. Litera is using resources to provide critical aid where we can. The global Litera family stands up for #ukraine.”

UK-headquartered transaction management platform Legatics has around eight people working for them in the Ukraine and issued the post below on 28 February. Legatics has team members in the country, and has relocated staff and  provided accommodation. Founder and CEO Anthony Seale said: “Having visited the country and worked with such talented people, it has been heartbreaking for us to see the outbreak of war in Ukraine.” 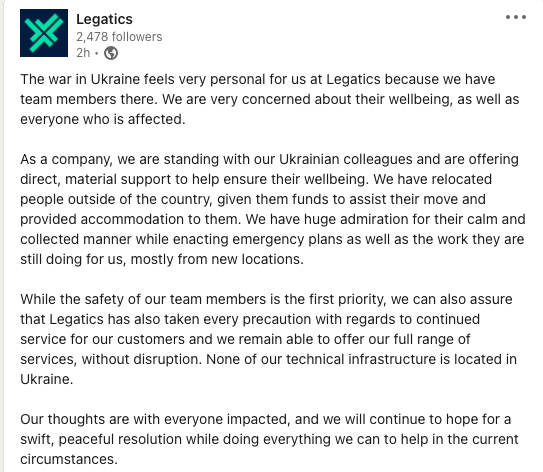 Syncly is a no-code cloud integration platform based in Sydney, Australia. Co-founded by Stewart Rasmussen and Chris Ogram, Syncly has three developers in Ukraine: two are in the war zone, one of whom is unreachable. A third has been called up to fight, according to Rasmussen.

Other legal tech vendors to have taken a public stand in support of Ukraine include legal template startup Genie AI, where co-founder and CEO Rafie Faruq said on LinkedIn: “If you know any Ukrainians looking for jobs and relocation, we created a special form on https://lnkd.in/dBJv5z4c – please share.”

Genie AI posted separately: “Genie wholeheartedly supports Ukrainians and refugees from war. For any Ukrainians looking for jobs abroad and relocation, please fill this special form we created, which is shared publicly with other companies hiring in addition to us: https://hubs.la/Q014-15g0

International law firms having to respond to the crisis include Baker McKenzie, CMS and Dentons, which have closed their offices in Kyiv. Bakers said in a statement on 24 February: “In light of the military action underway in Ukraine, we have closed our office in Kyiv until the situation stabilizes. We are closely monitoring developments at all times and are doing everything possible to support our people during these challenging circumstances.”

CMS said: “Although our communication lines remain open, we have made the decision to close our Kyiv office until further notice. Our thoughts are with our colleagues, clients and friends during this difficult time. We, like many, hope for a peaceful resolution to this conflict.”

According to Reuters, at least two Ukraine-based firms – 140-lawyer Asters and Avellum, a full-service law firm with 90 employees – have also shuttered their offices and say their employees are safe.

Security of client data is top of mind and Reuters reports that Serhiy Chorny, a managing partner of Baker McKenzie’s Kyiv office, said in an email: “We have well tested, top-of-the-market security procedures for client data and other sensitive data, including storage and back-up on servers outside of Ukraine.”

Baker McKenzie, meanwhile, is reported to be parting ways with major state-owned Russian clients amid heightened sanctions and a growing call for the West to take action, as Ukraine continues to defend against the Russian invasion.

The international firm told Law.com International that it is “reviewing and adjusting our Russia-related operations and client work to align with all applicable sanctions and comply with these fast-evolving laws”, and “this will mean in some cases exiting relationships completely.”

LinkedIn was awash over the weekend with posts urging more business leaders to take a public stand in support of Ukraine. Jason Fox, London managing partner at US law firm Bracewell said: “I am not seeing business leaders speak out against the Russian invasion of Ukraine. Keeping your heads down? Time to speak out. If you have a view now is the time to express it and act on it. Everyone can do something.”

Responding to his post, Simon Tysoe, a corporate and regulatory partner at global giant Latham & Watkins said: “It is poor that leaders remain silent and have not yet taken action regarding ties with Russia. I would urge everyone to donate to their charity of choice involved in supporting Ukraine and its people if they can. I would also ask that you contact your local MP to voice exactly what you expect European democracies to do in the face of this.”

And Michele Alexander, a partner at Indiana-headquartered firm Barnes & Thornburg said: “I am really glad that you posted this. There are times where there cannot be a distinction between “business” or “work” and everything else. Compartmentalizing makes us accessories.”

However Norton Rose Fulbright has come in for criticism on social media after reports that it has banned attorneys from commenting on Russian sanctions. A Norton Rose Fulbright spokesperson said: “As with many other law firms, it is standard practice for us to issue internal notices on any developing legal and regulatory issues covered by our practice, such as changes to sanctions. We’re clear that this does not in any way prevent members of the firm from voicing any views that they may hold on the wider Ukraine invasion and we fully support them doing so.”

If you wish to donate to the Ukraine Crisis Appeal the link is here.